A Study In Terror

These are the first character designs I did for a strip written by Robert Tinnell called A Study In Terror - it's a riff on those great 1960's psycho thrillers like Hysteria , Fanatic and Paranoiac ! Bob wrote the first script which I've worked roughs up on. It was originally destined as a back-up strip to run in Bob and Neil Vokes' monthly Flesh And Blood comic. That's now become a graphic novel so A Study In Terror has no home now. No matter , I hope we can ressurect this at some point in the future because I really love the 1960's setting. Here's some pics for now!

Labels: A Study In Terror

This illustration was a double page spread ( covers two pages). Firstly I set up the correct size template in Manga Studio with central page divide. I wanted the old Victorian school building to feature strongly with Ianto looking back pensively whilst Jack watches in the SUV. Two figures and an interesting building are more than enough for an illustration. I pencilled up the drawing in blue pencil in MS and after editorial comment *lifted* the SUV higher and made it more prominent. 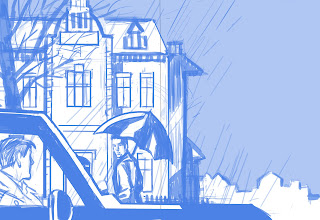 Next on a new layer  I inked the drawing using the pen and marker tools in Manga Studio. I made particular use of the horizontal and vertical ruler tools on the building. The tree was inked on a seperate layer and then the rain added on a new layer using the rain filter. I then customised the computer rain to my liking - deleting lines and adding new ones . There are no perspective lines in this illustration so it must be viewed as four seperate planes - SUV  forground , Ianto mid ground , Building in background with horizon line of rooftops 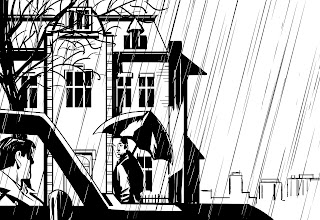 Finally the file is exported into Photoshop for colouring. With such a relatively detailed drawing I kept the colour scheme simple. 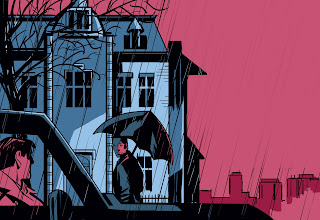 Here's a commission I did awhile back. Sea Devils are great to stylise ( they appear in The Cybermen strip prominently). The original of this was hand coloured but in the interest of archiving this is the photoshop version I did to find the colour scheme.I kept to the original monster colours but pepped up the background. 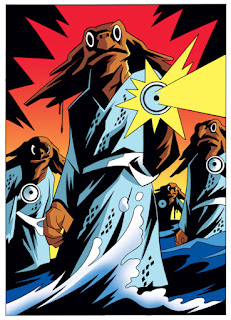 The Cybermen - an appreciation

This was borrowed from   http://shallwedestroy.blogspot.com

There’s also a feature on the making of The Cybermen strip, which is especially welcome as that strip is probably one of my favourite things in Doctor Who. Even in the small images printed in the article, it still looks incredible - stylistically incomparable, and not only within Doctor Who. I’ve never failed to be massively impressed by Adrian Salmon’s art, and it was particularly effective there, meshing perfectly with the arc’s epic, faux-mythological tone. (Trade paperback? Anyone?)

Talented artist Danny Kelly posited a question about drawing recently - about the number of lines different artists use to get to a drawing ( that's the simple version of the question). My answer might be of interest to a few.


It's true I go for the *line* right off the bat - be it roughs or pencils. That said I rarely get what I'm after first or tenth time ( that's what erasers were invented for:) I try to get all the basic structural shapes in place first and the gestural marks ( the grace of the drawing). Usually I then let the image *lie* then before coming back to it and tightening up required details till enough is there to be readable. Kirby used see the image before pencil touched paper and practically traced it - I can't do that. I like what John Romita said about *finding* the image on the page - involving sweat and tantrums ( in my case).

It's occured to me that I should devote a bit of time to theorising ( or bullshitting depending on what you think of my thoughts) here on my blog. I'm not that cerebral an art guy but I'm not a total instinct artist either ( like say Frank Frazetta). A pal Rob Davis blogged recently about COLOUR ( and mighty interesting it is too)