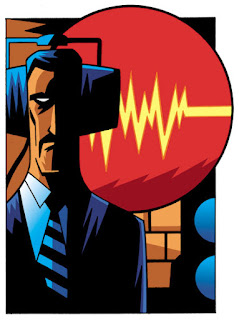 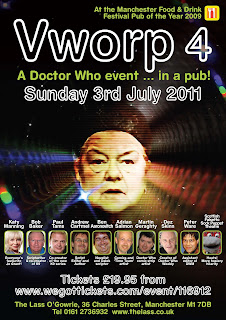 END OF THE WORLD ? 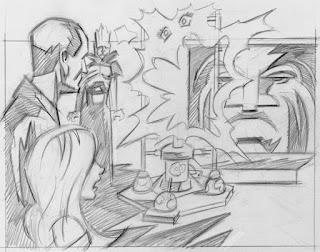 I was really pleased with how this one turned out. After having *nerves* drawing ROSE , I relaxed here and I think I did a better job. Particularly pleased with Eccleston this time and Boe was a dream to draw in my style. 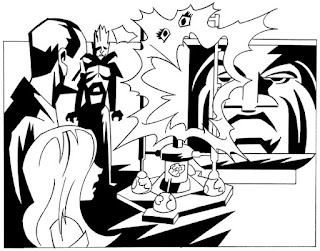 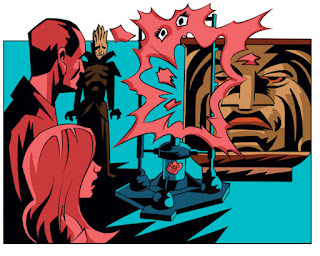 Labels: Dr Who Time Team, End Of The World 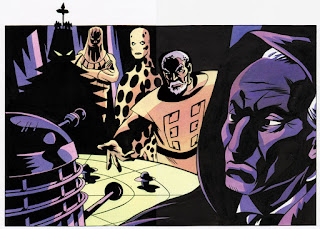 All the William Hartnell Timeteams were pre digital. In some rare cases I made colour copies  before selling the originals. Here's the DALEK MASTERPLAN art , based only on telesnaps , a few stills and mostly my imagination. This was drawn before a lost episode was found that showed the alien delegates. 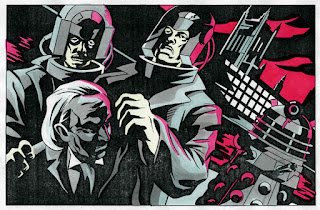 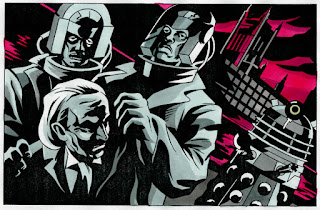 Two colour tests on photocopy paper for DALEKS INVASION OF EARTH. Looking at the art now I'd be inclined cheat the scene and have the Dalek further back rising out of the Thames... 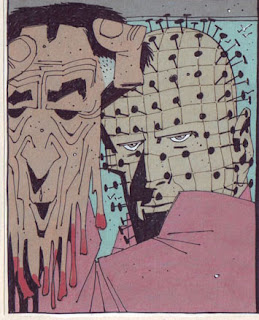 So I planned to write a quick post to highlight that artist Mick McMahon has his own blog now called 'Tugging Your Coat' - it's on my recommended blog list. Then I realised 'how could I just leave it at that?' . Mick has been the biggest influence on my work of any comics artist  this side of the pond. It's an influence that goes to my very core - let's see where that leads us?
I first saw his work on Judge Dredd in 2000AD , when the comic launched. I'm not sure I was that struck initially , his tough drawing style didn't fit with the other artistic influences in my life , American artist Bernie Wrightson and England's John Bolton were my blueprint for great comics. Mick was more like a musical influence , there was something punk about it , disrepectful , edgy. He evolved quickly too , shucking Carlos Ezquerra's blueprint off and making his own mark on Dredd bringing in the big chin , big boots. BLOCK WARS was the last Dredd he did from that period  - blocky indeed. The crowd scenes reputedly killed it for him  and he left Dredd.
ON INFLUENCE.
Everybody's favourite McMahon work is SLAINE it seems. Everytime I ask this question I get the same answer. 'Sky Chariots ' is like the Rosetta Stone. It's also responsible for more McMahon-alikes than practically anything else he's done. Okay maybe Dredd has influenced a fair few. I've no issue with being influenced , except maybe a little when an artist fails to step out of the SHADOW. I'm as guilty as the next with regard to Mick , though my influence comes from a little later in his career. After returning to comics with the THE LAST AMERICAN ( after a being ill) , his work had evolved yet again. Mick has said in interviews that though he wasn't drawing , he  still was in his head. TLA is a tour de force ( go get a copy of the ComX album) if you don't believe me. Pretty grim too. The art has a level of detail not seen in his work before ( okay maybe SLAINE is a contender) , marker pens on watercolour paper with Magic Marker colours were used ( I know I sold him some at a shop). I remember seeing some pages in COMIC SHOWCASE and being stunned , my eye practically against the pages. All this detail was held together by extremely strong linear drawing , a style of drawing that became paramount to his work whilst detail was pared down. This work is my biggest influence. It taught me to try and see clearly , forget flourish and fancy mark making , simple direct drawing/storytelling rule. Sometimes I forget this lesson. Sometimes I need reminding and this page just did that. 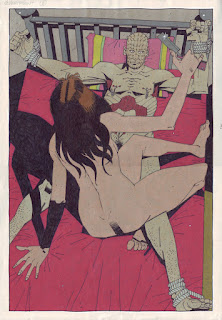 So today I run across a full page from HELLRAISER # 10 . I'm floored.Seriously. I'm reproducing it here with his consent. Clarity of drawing is the key. Just look at Pinhead's hands. Not a wasted mark. None of the flourish of SLAINE - this is the drawing of a new level. The composition is also worh noting - sexy without being sexist - I love how Mick has drawn her hair - shape and form , but not dead geometrey , there's that slight punky edge ( from DREDD) still there.
Mick's next project is KESTRELS which could be his most personal too. I like what I've seen - the genius is still intact like I had any doubts...
A
Posted by Ade Salmon at 11:28 2 comments:

This artwork is identical to the very first Time Team except David Tennant replaces William Hartnell . I was trying to think of an original idea for a piece of art for a charity auction and this image popped into my head! It was an interesting exercise to revisit a style of drawing I'd not done for years again. Memories flooded back of that first call from Gary Gillatt ( then editor) asking if I'd be interested in illustrating a new feature for the magazine. The money's not good he said ( 40 quid) but it will be 7 years worth of work! So right he was and more. At the time I was driving a van delivering newspapers in the day and drawing what little jobs I could get. This was a creative lifeline that I'll never forget - so thanks Gary.

Pop over to http://damned-to-darkness.blogspot.com/  for exclusive look at new Terry Sharp art plus letters for the ongoing DAILY strip I'm working on... 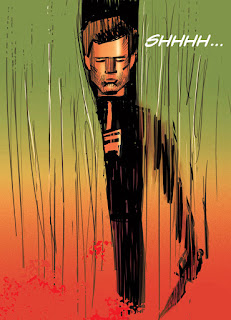 Found this horror double bill design in the archives recently. As a kid I became a lifelong fan of the genre through the BBC2 horror double bills of the late 1970's. Usually a Universal monster flick in b/w followed by something lurid in colour - a Hammer or Tigon picture if you were lucky. This probably explains my obsession with drawing this stuff today...

I'm lucky enough to be one of the artists chosen to help tell Nel's life story . My five pages written by the genius that is Rob Davis. Here's Rob's b/w cover art. 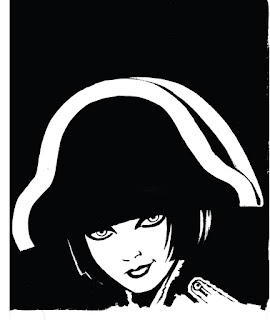 There's an FB page too.

I'm coming for you Witchfinder General ... 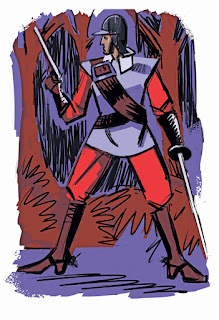 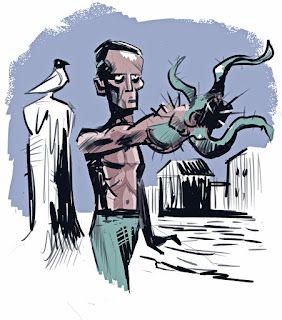 Victor Caroon  down by the docks .. 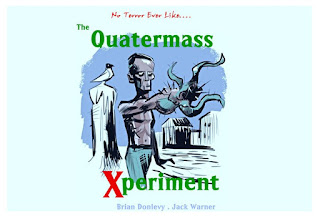 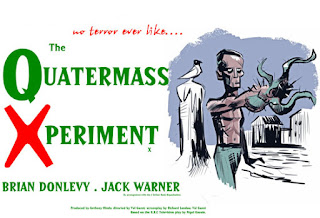 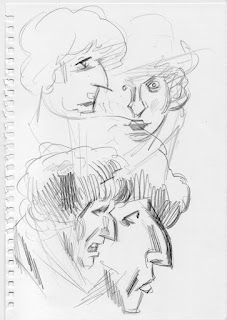 Can't remember why I did these - maybe just for the hell of it. Anyway , I love drawing Tom and wish I'd been around to draw some strips with him as the Doctor . I did do JUNKYARD DEMON 2 come to think of it ...

My favourite cover for John Wyndham's THE MIDWICH CUCKOOS buy Paul Hogarth ( 1960). A simple design that holds so much frenetic energy in it's lines. You can see more brilliant Penguin Science Fiction cover design at http://www.penguinsciencefiction.org/04.html#1440a 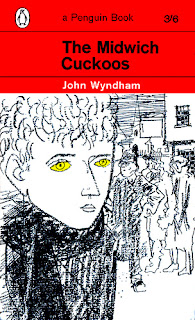 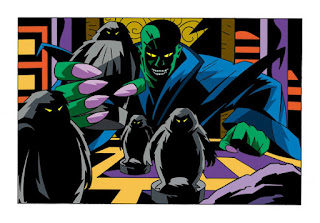 Patrick Troughton stories were always brilliant  Time Teams to draw - usually we were spoilt for choice and it could be a toss up between illustrating THE ABOMINABLE SNOWMEN or THE TOMB OF THE CYBERMEN in this case. Luckily I got to do my TOMB illo later as a cover for DWM ! 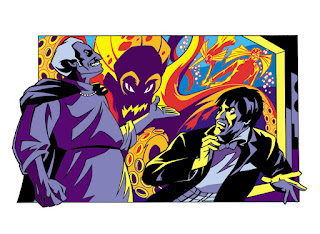 The UNDERWATER MENACE was done at a time when I was trying to get a handle on digital colouring and all it's possibilities. Everything and the kitchen sink got thrown at this one and I probably over played my hand. That said it's got a groovy 1960's psychedlic edge I like.

My new blog all about the adventures of Terry Sharp who I co-created with Robert Tinnell is now open . I hope you enjoy...

http://damned-to-darkness.blogspot.com/
Posted by Ade Salmon at 09:34 No comments:

To compliment the previous post here's The Rescue . There's not much to add - it's a fairly lowkey crashed spaceship drama  with alienesque Koquillion the visual centre . I've always liked Vicki and this gave me a chance at a decent profile shot. Sandy the sand monster was requested by the editorial team and who could blame them? 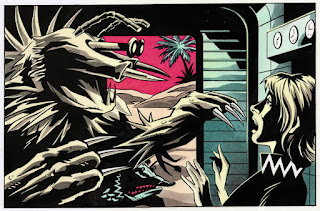 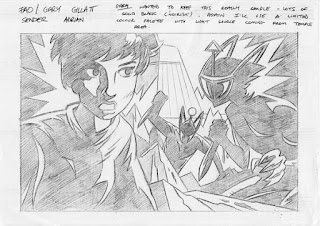 Here is a rare example of a piece of Time Team art from before I went to digital colouring. After inking the  approved pencils I would make numerous photocopies to try various colour combinations on. Once I settled on the right colour scheme I would then hand colour the original with Dr Martin's Liquid Watercolors. You either got it right first time or wrecked the art ( though there's many a time I fixed mistakes with gouache )  The finished art was then sent to the DWM office where Peri scanned it on for publication. Apparently when I finally succumbed to the darkside and sent in digital files - her life got so much easier.:) 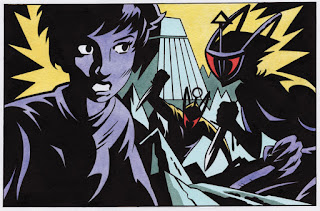 The art you see here is one of only two hand coloured original Time Team's I still have in my possession , having sold off the rest very early in my career.
Posted by Ade Salmon at 11:20 3 comments: 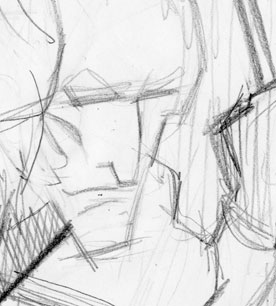 Clip pic from my pin up for : 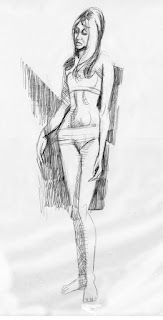 The newly opened Hepworth in Wakefield is well worth visiting. Free entry to see some truly iconic sculptures by Barbara Hepworh and her contemopraries like Henry Moore and Ben Nicholson. 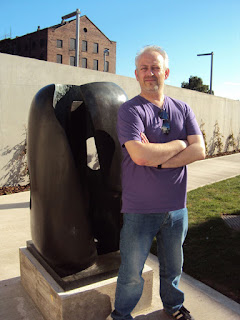 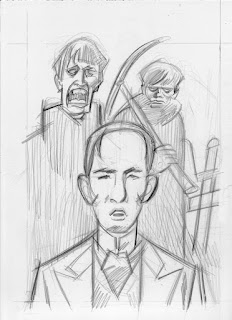 PLAGUE OF THE ZOMBIES or POTZ as it's known is a great zombie flick made by Hammer studios back in '66 . Whilst Andre Morell is undoubtedly the star , it's John Carson's  Squire Hamilton who ends up my favourite character. Thoroughly iredeemable . I met John who I can say is the exact opposite. I got him to sign my issue of House Of Hammer as the Squire ( which he thought a lark). This is my longwinded way of introducing today's drawing - the Squire and two of his zombie miners. Check out the film when you've a chance and I hope you like the drawing...