Another image from the Time Team archive. At one point the feature covered two stories an installment which inevitably led to one story not getting illustrated. This was a shame as the period covered quite a few popular Troughton monster stories. Sometimes we snuck a smaller second illo in - this one from the infamous WEB OF FEAR. Later A smaller second artwork became part of the feature under editor Clay Hickman. I'd love at some point to revisit the *missing illos* - perhaps for  a TT book ?! 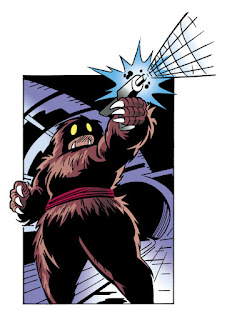