One thing we all wanted was to drop the grittier inking style and return to the more classic TT look for the new series. Not so much a clean slate but a more stylised approach was on my mind. Episode one ROSE presented a few illo choices - Rose being hounded by the Autons at the start , Mickey going Auton mental in the restaurant but in the end only one picture would fit the brief. It's Rose's first heroic scene in the series where she swings down to save the Doctor. Both leads were in it plus the threat. 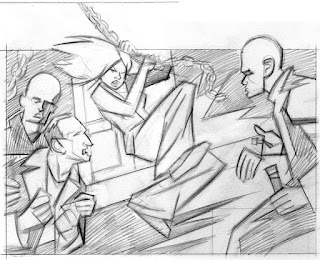 I knew I wanted Rose to be central in the image , the focus point . I tried a shot of her swinging directly at the viewer but eventually opted for a more side angle - frankly her flares were making things difficult! Once the pencil was approved I inked the picture then imported it into Manga Studio to give the lines extra sharpness. This blackline drawing was then coloured in Photoshop. I planned on coming up with a unique colour scheme using a pinky rose colour - but couldn't make it work. Eventually the colours seen in the episode were the only option - the blue of the Tardis  adding a bit of zing ! 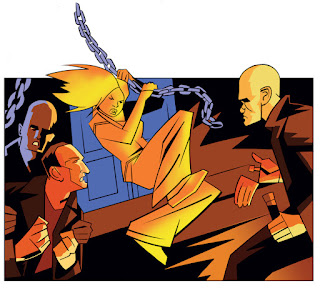 Next month THE END OF THE WORLD .... so much to choose from.