Me and Johnny Craig go a long ways back. I first clocked eyes on his comics work whilst I was at college. I'd got Russ Cochran's hardback reprint of VAULT OF HORROR and instantly had fallen in love with Johnny's work. He produced both covers and strips for this E.C. anthology title. His drawings had a wonderful considered clarity to them , nothing rendered to hell. His storytelling was considered and he wrote all his own stories too! He wasn't fast and therefore never hacked. He was all about drawing only what was needed and drawing things right within his style. I'm sure he idolised Caniff as he employed a similar brushstroke. To cap it all he was a genius cover designer - arguably E.C. comics' best.

The clarity I fell in love with bled over into my own work wether consciously or unconsciously. He had such grace and that was something I desired to replicate. Johnny died on 13 September 2001. My birthday. So every year I think of Johhny today and how much he continues to mean to me. 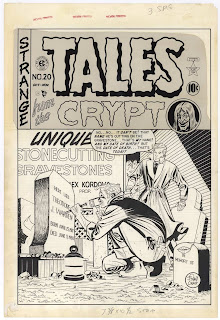